Mike King gained his love for physical activity early in life. He and his brothers grew up in rural Pennsylvania. “We were always outside,” Mike says. “When I wasn’t busy on the family farm, I was snow skiing or riding my motorcycle.”

He also was a top athlete on his high school cross country and track and field teams — until a devastating wreck took all of that away.

The Day Everything Changed

On August 13, 1978, Mike was on a motorcycle trip with friends in Calgary, the largest city in Alberta, Canada, when he collided with a car. His internal injuries were so severe doctors weren’t certain he would survive. Mike doesn’t remember the accident. But he’ll never forget waking up in a hospital and being told he’d broken his back and would never walk again.

“Life, as I knew it, was over,” Mike recalls his emotions in that moment. “I was 20 years old and a paraplegic. That’s the day everything changed.”

Depression hit especially hard once he completed rehabilitation and was released from the hospital. “I didn’t want to burden my family with taking care of me,” Mike says. “We lived in a two-story farmhouse, and my Dad or one of my brothers had to carry me up and down the steps. For someone active, athletic and with an independent streak like mine, that was a bitter pill to swallow.”

Some days Mike didn’t even get out of bed, and he wouldn’t talk.

“It was ugly at times,” he admits. “I was angry at God even though I grew up in the Christian faith. I never doubted God’s power,” Mike says. “But I kept asking, ‘Why did He let this happen? Why didn’t God heal me?’ ”

Mike reached such a low point that thoughts of suicide briefly went through his mind.

“I was wrestling with God — and all the while He graciously surrounded me with people who showed me unconditional love without strings or expectations,” Mike recalls. “One of the most valuable things my family and friends did for me was to let me know it was okay to be angry — even at God. That gave me the space I needed to begin to work through things without judgment,” Mike says. “That was huge.”

Two of Mike’s high school friends asked him to go to the movies and dinner every week, something they’d done before his accident. “I kept turning down them down,” he says. “But one night they called me up, issued the invitation, then hung up on me before I could say no,” Mike remembers as he laughs at their persistence.

“We went to our usual burger hangout and ran into a lot of other friends. They were genuinely happy to see me, and I was comfortable with them,” Mike remembers. “That sparked the realization that others still saw me, Mike King, not a wheelchair. And I needed to see myself in the same way. I needed to focus on what I can do, rather than what I can’t. Nothing changed about my situation. But that new attitude dramatically changed how I faced life,” he says.

Mike’s identity as an athlete had kept him focused on his physical limitations and challenges, but he was also gifted vocalist. Mike and many of his friends sang with the Lancaster County Choraliers, a worship choral group.

“Our music director was a tremendous source of encouragement,” Mike remembers. “He told me that my accident didn’t take away my ability to sing, and whatever accommodations we’d need to make for me to tour again with the group, we’d figure out together.”

Spared for a Purpose

During the summer of 1979, Mike toured with the Choraliers through several states and Canada. In what seems an incredible coincidence, the worship group was driving between Calgary and Banff National Park on August, 13th — on the same stretch of highway where Mike’s horrific motorcycle accident took place one year, to the day,  earlier.

“Banff is still one of my favorite places in the world even though its where my life changed forever,” Mike says. “But as awe-inspiring as the Canadian Rockies are, it was a pretty eerie feeling to be traveling that same road.”

Mike’s friend, Greg, who had been riding beside him on that fateful motorcycle trip, was again sharing August 13th with him, this time as a member of the choral group.

“I asked Greg to point out the accident site to me,” Mike recalls. “As we drove by the area Greg indicated, we saw another accident, which we learned later had been a fatal one.” Mike recalls how quiet everyone was as they drove by the crash scene.

“Later that night, Greg and I talked about how much had changed in a year. We laughed and cried and we really processed things together,” Mike remembers. “It was cathartic.”

Greg told Mike he was sure God spared his life for a purpose. “Those words really took hold,” Mike says. “They ignited a spark in me.”

Mike enrolled at Heston College in Kansas with plans to pursue a church ministry degree. “Moving away from Pennsylvania for the first time in my life was a bit unnerving,” he admits. “I knew I’d face unique obstacles — both socially and physically.

“Sometimes I had to be pulled up and down steps because there weren’t ramps back then,” he recalls. “But that opened me up to ask for help, which was a huge emotional step forward for me,” Mike reflects. “It also helped me realized I was capable of making new friends — people I hadn’t grown up with and known all of my life from school or church. My world could be as big as I let it be.”

After graduation, Mike set his sights on a new goal — and this time the world would be watching. He planned to travel from Fairbanks, Alaska, to Washington, D.C.  — a journey of 5,605.8 miles — pushing his wheelchair.

“Travel experiences were a big part of my life before my accident,” Mike says. He backpacked in Europe after high school and went overseas on mission trips. “Touring with the choral group gave me a taste of that again. I learned that my disability didn’t take away my mobility. Travel was still possible for me.”

A friend jumped in to help with logistics of the trip and to set the wheelchair journey up as a fundraiser for rehabilitation centers, and Mike got busy training. “I was pushing what was, in 1985, a top-of-the-line racing chair. It weighed 30 pounds, which is extremely heavy by today’s standards,” Mike explains.

His goal was to make 45 miles each day. But the first day out, Mike’s hands blistered in a way they hadn’t during his months of training.

“I just couldn’t focus on anything but how much I hurt,” Mike says. Discouragement and mental, physical and emotional fatigue set in. By the third day, Mike was almost ready to quit.

“But the morning of that fourth day, these high school kids on their bicycles joined up with me. There must’ve been 20 or 30 of them, and they were asking me all sorts of questions about how my racing chair was engineered and (questions like), ‘What’s it going to feel like when you ride into D.C.? Will President Reagan be there to greet you?’ ”

In their minds, Mike’s success was a foregone conclusion.

“I got in 60 miles that day, and all of a sudden I just knew this was going to happen. Not because of me, but because God kept providing me exactly what I needed exactly when I needed it — every inch, every moment, every mile. When I felt alone, God put persistent friends in my life. When I felt discouraged, He surrounded me with people who believed in and motivated me. This was God’s love with skin on.”

Mike’s high school cross country coach quoted Philippians 3:13, “Forgetting the past and looking forward to what lies ahead, I press on to reach the end of the race and receive the heavenly prize for which God, through Christ Jesus, is calling us.”

“I got that in my mind, and God’s Word pushed me all the way to D.C.,” Mike says. He made the trek in 120 days and raised $120,000 distributed between five rehab centers to help others with spinal injuries.

“The big takeaway for me from the summer of 1985, and that journey, was that I wanted to know God better, to dig deeper into His word, and dedicate my life to helping others.” And God faithfully provided opportunities for Mike to do just that.

Technological advancements and design innovations were making adaptive sports not only possible at that time, but also competitive. Mike was in the thick of it, becoming an adaptive snow skier, wheelchair racer and track and field adaptive sports athlete.

“An injury kept me from making the 1992 Olympics Team, but I look back and recognize God was teaching me something important through that disappointment,” Mike reflects. “Pride is a huge temptation. I was getting a lot of media attention and admit I started to let the competitive spirit go to my head. I wasn’t using my athletic gifts for God’s glory. I’d let it become about me.”

Mike says God always has a Plan A for our lives.

“When things don’t go my way, I used to fall into the Plan B mindset, as if I’d have to settle for something less. I don’t have to understand it,” he says. “But I know God never changes, and His plan and purpose for my life (are) good — the best.”

“We often travel some pretty rough and winding terrain toward our purpose,” Mike asserts. “I’ve found that’s true for many people, not just those of us with a disability.”

He returned to the family business, began coaching others in adaptive sports and eventually took a job with Joni and Friends, a nonprofit organization dedicated to sharing God’s love with people affected by disability.

“And that’s when things got really interesting!” Mike says. “I met Sharyn at a conference. We started dating long-distance since her office was in Dallas.  It wasn’t long before we realized God brought us together.”

Mike and Sharyn married, and he says God has directed their steps ever since.

“We’re both athletic and want to motivate others to live full and healthy lifestyles,” Mike explains. They began to pray about how they could use their combined gifts to help others. In 2013 they formed Powered to Move, based on a wingman model. —the organization brings able-bodied athletes, like Sharyn, together with those who have disabilities to enjoy the race experience.

“It’s a wonderful model of support, not just for the athletes, but for the families. Just as God surrounded me with family, friends and sometimes complete strangers to motivate my journey,” Mike says, “we’re able to create a community of folks who encourage and push one another to live into their potential and enjoy life along the way. 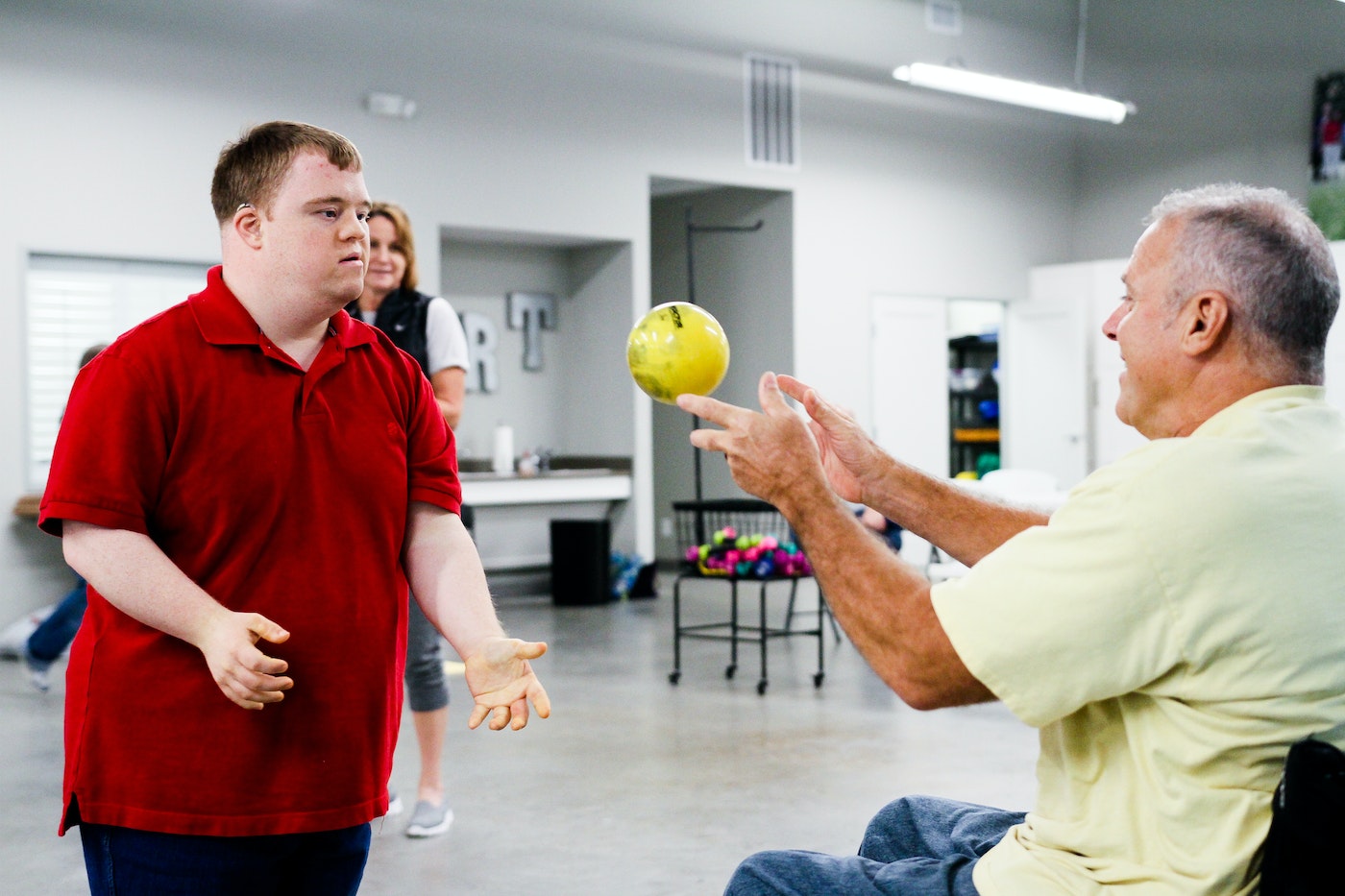 Mike King and Sharyn King, founded the Powered to Move nonprofit organization in 2013 to promote physical fitness among persons with mental and physical disabilities and increase their physical, emotional and spiritual well-being.

A California girl with a southern accent, Melissa Ford Thornton is a storyteller, poet and music publicist. Her master’s degree in English is from the University of Alabama-Huntsville. When she’s not writing, kayaking, running or hiking, she’s spinning yarns on public radio and occasionally jumping out of planes (with a parachute). You can connect with her by clicking here.

254 || From Skeptic to Servant for the Love of Joy