In 2016, Billy Ivey posted a silly note he’d scribbled on a paper napkin to Instagram. The note itself wasn’t unusual. Billy writes one every day for each of his five kids for their sack lunches. But something about a dad’s simple act of kindness struck a chord.

Billy posted another: “The black spots on bananas are like battle scars. You are about to eat a very, very brave banana!” The response was overwhelming.

“I started hearing from friends I hadn’t seen in years. They’d seen one of my ridiculous napkins on another friend’s Facebook page and said it brightened their day. It’s crazy how people connected with this,” Billy says. “What I was writing wasn’t profound, but I guess we all need encouragement and to know someone’s thinking about us.”

People began sharing stories with Billy about times someone wrote a note that made a positive difference in their own lives. Billy’s so-called “napkinisms” exploded on social media, and an executive at Chick-fil-A recognized their potential to brighten the lives of children in need.

Smiles for Kids in Need

The Chick-fil-A Foundation offers free meals through several ministries in Atlanta, Georgia, including the Boys and Girls Club and Action Ministries. “These are kids who receive free or subsidized lunches during the school year but would otherwise go hungry during summer break,” Billy explains.

Billy has partnered with Chick-fil-A for two summers to encourage and bring hope to children in need through his napkinisms. The first summer, Billy used a permanent marker to handwrite 3,000 napkin notes, which volunteers lovingly tucked into kids’ lunches. Billy wrote funny, kind and uplifting messages — simple, but genuine words.

The children were fed physically, but they also gobbled up messages such as: “Someone who loves you is thinking about you right now.” Or, “When you’re happy, I’m happy. It’s a win-win!”

“These kids are hungry for encouragement,” Billy says.

And they aren’t the only ones.

Billy says he heard from his friend at the Chick-fil-A headquarters that even the volunteers were moved by the napkinisms.

“The exponential impact of a very small act of kindness blows me away,” Billy says. “You never know what small thing you might say or do will make a huge difference to someone.”

Though Billy’s partnership with Chick-fil-A substantially increased the demand, he continues to handwrite his notes for kids in their summer program.

This year, his goal is to get these hopeful messages into the hands and hearts of 10,000 children. He says that will take additional organizations getting involved and more napkin-note submissions.

“When I first solicited submissions from others, people seemed intimidated,” Billy recalls. “They thought they had to be super witty or write something brilliant. But all these kids really need is to hear, ‘You matter!’ ”

Since Billy’s first napkin note hit Instagram, hundreds of thousands of people have seen and shared #napkinisms. It’s not just a hashtag, though; it has exploded into a ministry that fosters children’s self-esteem, one napkin at a time. But Billy gives credit for the original napkinism to someone else — his father.

“My Dad had the greatest influence of any person in my life,” Billy explains. “He was a successful businessman, gifted athlete, a leader in our church and the most loving father in the world.”

He was also an encourager.

When Billy failed to make his high school basketball team, he was understandably devastated. But the next morning, he found a note his dad had taped to his bedroom door.

“Today is going to be a great day!” the note read. “This is your day! And no one can make it anything other than what you choose to let it be!”

It was an incredible gesture for Billy’s dad. The note had been painstakingly written over hours, with his father attempting to make it legible using his left hand because he’d lost the use of his right hand from the crippling disease that would take his life a few months later.

Tragically, Billy’s father died in his early 40s of Lou Gehrig’s disease when Billy was only 16 years old. But his dad’s positive attitude continued even to his death, and it remains a source of inspiration.

It Doesn’t Have to Be Grand

“I love very few things more than telling (that) story,” Billy says. “Dad wasn’t trying to change my life with that note. He just wanted to change my day. And he did!”

Billy says that perspective left an indelible impact on him.

One woman’s story is especially meaningful for Billy. In an email, she told Billy his mission made her reexamine her decision about not having kids. Her father had been abusive, and her mother was an addict. But his napkin messages had given her a different perspective.

“She told me she saw a picture of hope and beauty and fun and realized it was a possibility for her, too. That made a lasting impact,” Billy reflects.

“I don’t know where all these stories go or how they end. But I’m not responsible for the outcome,” Billy says. “I am responsible for taking advantage of the opportunities God presents to me, to come from a place of genuineness, to try to love well. I think that’s the real message shared with every napkinism. That’s what matters.”

If you’d like to learn how to join Billy in his mission to bring smiles, hope and encouragement to thousands of children in need, one napkin at a time, click here and get started!

By the way, I got a #napkinism of my very own: 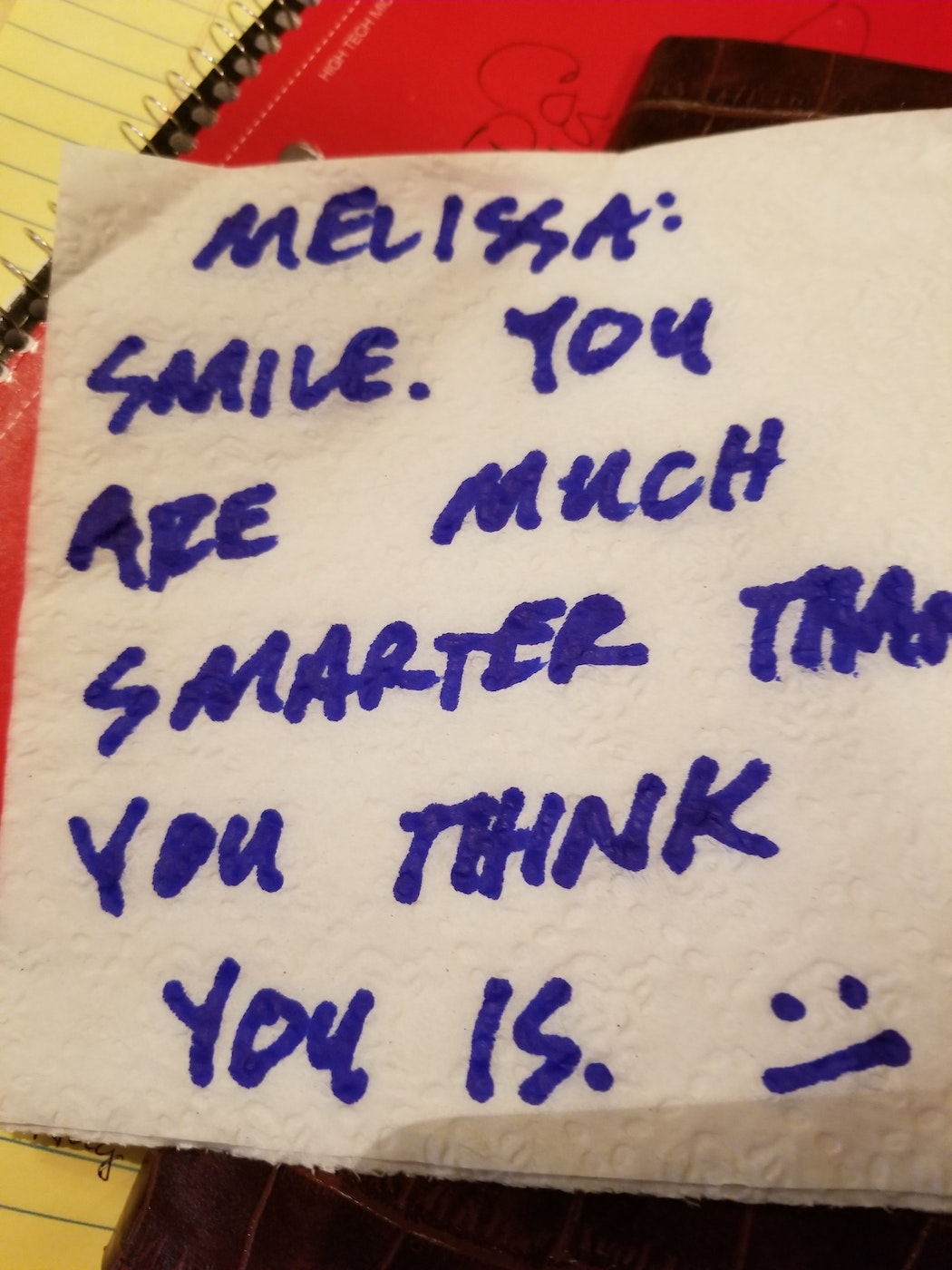 A California girl with a southern accent, Melissa Ford Thornton is a storyteller, poet and music publicist. Her master’s degree in English is from the University of Alabama-Huntsville. When she’s not writing, kayaking, running or hiking, she’s spinning yarns on public radio and occasionally jumping out of planes (with a parachute). You can connect with her by clicking here.

259 || Why Does God Work Through Broken People?

The Missing Element in Today’s Christianity