When I see pink ribbons, I think about how it’s interesting that my favorite color — pink — came to mean so much in my life. It’s now been more than ten years since my diagnosis, but I can still remember it like it happened yesterday. My thoughts. My feelings. My emotions. Disbelief. Disbelief when the doctor told me. That was quickly followed by fear. Fear of the unknown. Then shock. Shock that my world had been turned upside down in the blink of an eye.

I would imagine that anyone who has ever been told that they have cancer has experienced something similar. It’s a dark time when you find out you have such a horrible disease. And it’s a really dark time when you hear it a second time. That was me. In June 2002 it was in my left breast, and the following December it was in my right. I gasp just thinking about it. Did that really happen to me? It seems surreal.

I was only 40 years old, working full-time in a professional position, struggling through a strained marriage, raising a teenage daughter, caring for my elderly father, grieving over the passing of my mother, and battling for my life all at the same time. How did I get through it? How did I keep my sanity?

There’s only one answer — God.

I truly don’t know how people can handle a crisis without Him. Why would anyone even want to try? He promised in His Holy Word that He would be there for us if we just call out to Him, so why wouldn’t we? After all, if He can create the earth and all that is in it, on it, and around it, shouldn’t He be able to help us get through the difficult times in our lives?

For anyone who has ever gone through cancer treatments, I would presume that they would agree with me when I say it isn’t easy. But when I see those pink ribbons, I think about what else it means to me: Love. Love that my family and friends poured upon me before, during, and after my surgeries, chemotherapy, and radiation. Hope — the hope I held on to that one day I would be well again. And maybe the greatest of all, peace. The kind of peace that can only come from God Himself for the darkest of times.

There’s a part of me that’s glad I experienced the hardship I did. That’s not to say that I want to do it again, because I don’t. But if we don’t experience dark times, how will we see that it’s God Who will get us through them?

As I reflect upon those days, weeks, months, and even years of turbulence, tears well up in my eyes. Those were actually some of the sweetest times in my life — all because of God. He was there when I was first diagnosed. He told me as I walked out of the hospital, “They didn’t spend enough time on the right side.” If I had never been diagnosed with breast cancer, I would have never heard those words from the Holy Spirit.

He was there when my port became infected. He told me not to have the doctors put a new one in. He knew all along that there was a second cancer in that exact spot that would be found just two months later. He was protecting me, but had I not listened to Him and went along with what the doctors wanted me to do; I could have ended up with the cancer spreading all through my body. How sweet it is to know that God was my protector. Had I never had the infection, I may have never known just how much God protected me.

Just a week after my second breast cancer surgery, I was feeling well enough to play volleyball, my favorite sport. I called the surgeon’s office to ask if he thought it would be alright. When I told his nurse how well I was doing, she was amazed. It then dawned on me the reason I had healed so quickly: God. It is He who is the Great Physician, and by hearing my prayers He knew that I was growing weary. He not only worked through the doctor and other medical staff during the surgery, but He Himself worked on healing my body so rapidly. That Friday evening I played volleyball with friends and had a wonderful time. Later, I thanked the Lord for His tremendous healing power. Had I never had my second breast cancer surgery, I may have never come to realize just how great of a physician He is.

When I think back to the first days and weeks following my initial diagnosis, I remember how distraught I was. I was scared. So scared. As I gave my fright to God, He converted it into peace. People would say that to just look at me you would never think that I was going through cancer treatments. On the outside I looked fine, but the reason for that was because of what He had done on the inside. God had filled me up with a peace that surpasses all understanding. It’s a peace that can’t be explained unless you experience it, and I’m so glad that He gave me that opportunity. The best way that I can describe it is to think about being in a small row boat in the middle of the ocean with a storm raging all around you and no matter how large the waves are your boat remains completely still. It is truly an awesome experience and one that I appreciate having the privilege to enjoy.

I learned some very valuable lessons, but probably the most valuable lesson was to listen to God. I so often before wanted to pray, but I didn’t want to take the time to listen. He showed me and I’m convinced the One who created me always has my best interest at heart — His heart.

For years now the pink ribbon has represented hope in the fight against breast cancer. However, it means more to me than just that. It represents the hope I have in Jesus who first came to this earth as a baby and 33 years later died on a cross. It is the hope I have in Jesus, my Savior, that enabled me to endure not only the cancer, but the death of both of my parents, a divorce after 25 years of marriage, and the challenges following a job loss — just to name a few. Without hope in the Lord, this crazy ride called “life” would just be meaningless. It is the hope that one day I will see Him face-to-face and live throughout eternity with complete joy and peace that gets me through my days — even the good ones.

From disbelief to hope and all that is in between, I have so much to thank Him for. 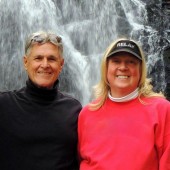 222 || Taken Aside By God: Learning In The Lonely Seasons

Team USA: David Boudia’s Platform Is For More Than Diving