I never had to manage my finances until after I was out on my own. In school, creating a budget and learning the discipline needed to follow it just wasn’t part of the curriculum. I don’t ever recall seeing my parents work on a budget. So you can imagine how clueless I was when I graduated high school and moved out on my own.

With my dad’s help, I purchased my first car. I was ecstatic! I owned my own car. It didn’t matter that I owed the bank $3,000. I was so proud of that little payment booklet. It was like a trophy.

Buying a car established my credit history, and I soon began to receive credit card offers. It was like companies were just clamoring to give me money. I was careful at first and just bought things I absolutely needed—like a nice big TV. Then I needed something else, then even more stuff. Soon all of those credit cards had reached their limits, and I couldn’t buy any more stuff.

For the first time, I took a step back and looked at where I had started—with a small debt of $3,000—and I was astounded at how quickly I had allowed my debt to grow. All because I wanted more stuff. My income wasn’t enough to cover even the minimum payments.

I struggled to make ends meet and visited some debt counseling services, but eventually I realized it was hopeless. The mountain of debt was not going away. Not even a little bit. I filed for bankruptcy. Even after bankruptcy, I almost fell into the same trap again.

You see, money wasn’t really the issue after all. My behavior was the problem. I was letting my love of stuff dictate how I spent money. I tried to rein it in by forcing myself to consider whether I really needed that item. Most of the time, I came to the conclusion that I could really live without whatever it was.

Several years ago, my wife and I determined we would be debt free by a certain date and began to focus our efforts on making that happen. The most important step we took was to acknowledge that everything we had—and I mean all of it—belonged to God. We had been given the privilege of stewarding everything God had given us well, and we were failing.

The hardest thing for me to do in that first step was to acknowledge to God just how badly I had managed His stuff and ask for help. (It may not come as a surprise, but most of us guys do not like to ask for help.)

The next step was all about modifying my behavior. I knew I couldn’t continue behaving in the same way and expect different results. I needed to thoroughly examine how I was doing things. It was a little time consuming at first.

For a month we logged everything we spent money on. Every single thing. Just that exercise alone began to modify our behavior. We found ourselves questioning whether or not we really needed that drink, bag of chips or candy bar.

After 30 days of logging, we broke all our expenses down into categories and added up the totals. Just like that, we had created a roadmap of where our money had been going. As we looked over our totals, we were surprised. Now, it was time to exercise some discipline.

That part was not fun, but we knew it had to be done. We sat down together, laid everything out before God and asked for His wisdom in being a good steward. The Bible says, “If you need wisdom, ask our generous God, and he will give it to you. He will not rebuke you for asking” (James 1:5).

We were on our way! Now it was time to tell each dollar where to go and what to do. We used the categories we had created when we logged our expenses from the previous month. We added and subtracted categories as we determined what was or wasn’t important. This part of our behavior modification took the longest, but the dividends were priceless.

We made some difficult choices during that time, slipped up and made some mistakes. We asked ourselves questions like, “Do we really need that new car, computer, phone?” We learned to wait at least 24 to 48 hours before making a final decision on any major purchase. We knew if we had to borrow money to make that purchase, our road to debt freedom would take longer.

Exercising discipline may have been uncomfortable at first, but we’ve been finding a new freedom in realizing that stuff doesn’t really bring lasting happiness. Scripture teaches, “No discipline is enjoyable while it is happening—it’s painful! But afterward there will be a peaceful harvest of right living for those who are trained in this way” (Hebrews 12:11).

For us, that part of the process has had some added bonuses. Movies were probably the biggest expense we felt was frivolous. Going to the movies just wasn’t important enough to budget for. But then we found a way around having to pay for movie tickets.

Some blood donor centers offer free movie passes for donating blood; therefore, we give blood and get two free movie passes each. Life-saving blood donation in exchange for movie tickets. And it’s nice think about the fact that we may be saving someone’s life.

We’ve also discovered there are other ways to spend our time and strengthen our relationship at the same time—FOR FREE! We go for walks together, read books, talk and go to nature trails. It all boils down to just spending time with each other—it doesn’t matter what we are doing. We are creating memories that will last a lifetime.

We have learned that stuff doesn’t bring happiness. Our joy comes from knowing we are being good stewards of what God has given us.

We’re not completely debt free yet, but we’re so close now that the light at the end of the tunnel is bright. We’re looking forward to becoming debt free, and our neighbors will probably hear us celebrating our freedom!

Tim White has lived in the Huntsville area for all of his adult life after growing up in Birmingham. He has 3 grown children and a lovely wife, Karen. He enjoys helping people with their money problems, providing career coaching, and flying airplanes. If you need coaching in any area of your life, he can be contacted through www.greatervisioncoaching.net. Like us on Facebook! 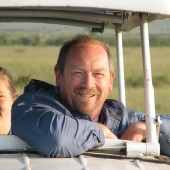 327 || Where Was God In The Noah Chamberlin Tragedy?

A Tribute to the Greens