At the end of a long weekend spent handing out over four thousand Bibles, the eight of us stood, applauding the two gentlemen across from us on the merchandise floor. We had spent the last four days talking to these men, getting to know their story and sharing ours. While we gave out Bibles, they sold handmade leather goods — corsets, dresses, men’s undergarments and vests.

They were also gay.

But they were standing and applauding us, too.

DragonCon, held in Atlanta, Georgia, is one of the largest conventions in the world, with over 63,000 attendees in 2014. The convention covers comics, video games, +Anima, television, movies, live-action role playing (known as LARPing), and holds panel discussions and many other activities over four days in downtown Atlanta. Hosted across four hotels and a convention center, DragonCon brings in over $55 million to the city annually.

It is an undeniable fact, and conventions like DragonCon remind us video games have become a part of our culture in the same way the telephone, movies and television have. Video gaming is an established medium the millennial generation and those to follow will think of as naturally as my generation think of the television and cell phone (the original bulky ones, mind you).

Douglas Adams, author of Hitchhiker’s Guide to the Galaxy, quipped that after one turns thirty, any technology invented is no longer seen as something wonderful or the possible catalyst for a career, but as something that will bring about the end of western civilization. And while video games haven’t brought down the world as we know it, the medium has been largely ignored by an insular Christian culture that would rather not deal with it.

While the traditional church has failed to engage the cultures that grow around new mediums, a growing number of Christians have formed their own communities and ministries.

GameChurch exists to tell gamers one very simple and clear message — Jesus loves you. It’s simple, and to some it may seem rather shallow, especially compared to the missionaries risking life and limb in countries where sharing the Gospel is punishable by death.

But GameChurch is providing something no other organization is doing on this scale for a culture that has either been simply ignored by parochial Christianity or told they are going to hell. Bullhorn-wielding street preachers proclaimed anyone who entered a building for DragonCon would be damned to hell. But as we stood with our boxes of Bibles, the most common question we got was, “Are you associated with the street preacher outside?”

I arrived in Atlanta, Georgia, with seven other men and one woman at the house we were renting two blocks away from Martin Luther King Jr.’s house. While we set up our booth at the convention, we saw it was directly across from a gay couple, Miles and John, who were selling handmade corsets and similar outfits.

I had never really interacted with a gay couple before, and while my reaction was not of hatred or fear, it was one of ignorance. I was not sure how to even start a basic conversation with someone who I had been told over and over was a sinful person who would lead us to the end of western civilization.

For five minutes there was an awkward glancing toward each other as we all were unsure of how to react. But our leader, Mikee Bridges, went across the aisle, shook their hands and began a conversation as naturally as speaking to any other person.

Later that day, I saw John break open a green shake mix for his water bottle. It was a packet from one of those direct marketing companies, and one that I used, too. I asked him what his impressions were, and from there a conversation started; we had many as the weekend wore on.

Making Friends With the Gay Couple

For four days, thousands of people streamed past our booths. We started asking people, “Hey did you pick up one of these yet?” while holding out our free copies of the Gamer Bible.

When they asked why we were giving them those Bibles, our response was always, “I’m just here to to tell you Jesus loves you and to give you some free stuff if you want it.”

At the end of the first day, both men came over to our booth and personally thanked us for being there. There were genuinely amazed at our honesty and love for people while not being filled with hatred and judgment. They told us if there were any problems with troublemakers, they would take care of it.

And they were true to their word.

The following day, a discourteous young man came to our booth and threw one of our gamer Bibles on the ground and walked off. One of the men across the aisle saw it happen, chased after the young ruffian and dragged him back to our booth to pick up the book and apologize to us.

A gay man chased down a rude, self-proclaimed atheist and made him pick up a Bible and apologize to us.

Very few things have caused me the level of surprise I felt when that happened.

At the end of the convention, we stood across from each other, offering a round of applause to the astonishment of the booths around us. In the space of a weekend we had shown the love of Christ to two gay men and to the booths surrounding us.

I still pray for Miles and John every day that some good will come of our interaction.

Nothing Else to It

That is what GameChurch is about. Teams of people who fundraise for their own missions trip to conventions or events around the world. We don’t get into debates over what our stance is on social issue X or political issue Y. We go to tell people Jesus loves them and to give them a message of hope — not judgment.

As Mikee Bridges told a member of the gaming press, “We don’t want anything from anybody; we’re not interested in that. We want to give away free things and tell them Jesus loves them, and that’s it. There’s nothing else to it.” 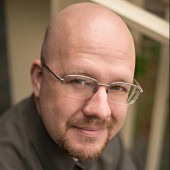 Jonathan R. Clauson is a Christian, husband, father and gamer. He began his career with Clear Channel Radio in high school as a producer and on air talent. He currently serves as a voice actor, writer and ministry leader with GameChurch.com.

Don’t Use a Period When God Wants a Semicolon

275 || Prude And Prejudice: My Struggle With Sex

13 || Living in the Psalms: When Divorce Rocks Your World