God, please forgive me for not reading my Bible today.”

“Dear God, I am sorry that I didn’t witness to everyone I came across today.”

“Dear Lord, I don’t think I really MEANT all the words I sang in church today, please forgive me!”

These were the kinds of prayers that used to go through my head and torment me all the time.

Growing up in a legalistic family, I was taught that not only did I have to live a good Christian life, but I had to act like everything was right on the outside, even when things weren’t ok on the inside. Going a step beyond legalistic, I was actually the preacher’s daughter, and as such, no one was supposed to know if I had problems or that I might be struggling with something.  I was called to be the example all the other girls were to follow. I didn’t have anyone my age to talk to about struggles I might be going through and none of the girls would ever come to me (I guess I was too “good” for them because I never let them see my vulnerabilities). I not only missed out on being a blessing to people, but more importantly, I missed out on the blessings they could have given to me.

From the age of 14 until I was 20, I struggled with obsessive compulsive problems mostly dealing with God, sin, and religion. I felt this constant oppression over me that I was always in sin and had to go to God for forgiveness about ridiculous things. I couldn’t even talk to people without repeating, under my breath, what I had just said (to make sure I “said it right” and was being honest); I had to really mean what I said or I was a liar.

As I got older, the obsessive compulsive problems lessened, but I still struggle with my perceived performance requirements from God and others. I still struggled with things like praying silently because I thought I had to say things a certain way in my head. What I didn’t realize was that I believed lies the enemy had placed in my head. Instead of believing the truths of God, I was living in fear. Scripture says, “God does not give us the spirit of fear, but of peace and a sound mind” (2 Timothy 1:7).

Another result of judging myself was a constant need to judge or measure other people’s performances. I struggled to love people who were different than me; I allowed little things to get under my skin. I discovered this issue in full force after I got married. I had to deal with people in the real world instead of my sheltered home. There were people I didn’t like, but then there were people I actually hated! If they caused me grief, I didn’t like them; if they didn’t apologize, I hated them.

The church my husband and I went to when we first got married was a refreshing breath of grace! The women there would actually talk to each other about the struggles they were facing and get help, advice, and prayer from each other. I thought, “Won’t they judge me if I tell them my problems?” But they all had problems and actually practiced what the Bible says in Galatians 6:2 about bearing each other’s burdens.

Their vulnerability, authenticity, acceptance, and forgiveness of themselves and others helped me to see God does not see my sinful self when He looks at me. Rather, He looks at me through the lens of Jesus’ righteousness – He sees me as His redeemed child. When I realized that was how He looked at me, I began to realize that I could view others that way too (Romans 5:9). The amazing measure of God’s love for His children has astounded me over and over again. You would think I would just get it by now. However, because it is so hard for me to love sometimes, I am astonished at how God could love His people who constantly rebel against Him. If Jesus loved me enough to die for me, how can I not love all the other people He died for?

I am so thankful that I no longer live under the constant fear that I have displeased God once again or feel the need to “do penance” to make up for my shortcomings. I don’t have to feel guilty when I accidentally skip a day reading the Bible. I had made “devotion time” a religious ritual instead of doing it because I enjoyed it or when I really wanted to just talk to God (because instead of a distant King, He is my close friend). Now, I feel free to truly enjoy my relationship with Christ rather than feel shackled by the rules.

Someone told me about a rock concert they attended where they saw a man leading a woman around by a huge dog collar and chain. That seems so extreme to us that we might laugh at it or think to ourselves that we would never allow someone to degrade us to that extreme. However, she was just outwardly expressing what most of us experience on the inside when we believe lies about ourselves. We allow Satan to lead us around in bondage because we choose to hear his voice over our Heavenly Father’s, which has far greater consequences than people just thinking you’re crazy in public.  How many things are you chained to? What do you allow to keep you in bondage? Is it fear, anxiety, panic, or guilt? Is it a feeling of not being worthy or good enough? Maybe you think that you are unlovable, unforgivable, or forgettable. Maybe you struggle with depression, low self-esteem, your identity, or wanting a sense of purpose. Whatever it is, it seems like the hardest prisons to break free from are the ones without locks, but God holds the key. When you start listening to the Voice of Truth, you can start to be free.

“God, thank You for giving me Your Word that I can read whenever I want to hear from You!”

“Dear God, fill me with Your Spirit and give me opportunities to be a witness for You.”

“Dear Lord, thank you for freeing me from oppression, guilt, and burdens, and help me to truly worship You with thanksgiving and joy!” 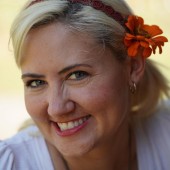